The colour of a beagle should be "any true hound colour" in the US , in most other countries it is "any true hound Colour" except liver because of the light yellow eyes that go with the colour. The tip of the stern has to be white. The "classic" beagle is the tricolour black-tan-white, and when the German Beagle Club started, the people that wanted to buy a puppy only knew the tricolors. We're glad to see a range of colours in the ring nowadays. The extension of colour could be all one colour (apart from the white tip of tail).  No breed apart from the similar marked packhounds allow such a range of colour and even without restricting it to spacial areas of the body.

The tricolours are usually black, tan and white. The black can be a shining black that will stay up to the age or the black will fade out until the dog gets older. The tan can vary from red to pale tan. The white will be pure white if it's not a mottle (on a mottle it's more cream). The other form of the triclours are the blue-fawn-whites. Blue is caused by the dilution gene (d for dilute) which lightens black (D for density) into blue, tan into fawn and liver ti lilac. The "Blue" coorectly described is the grey colour of the Great Dane. THe tricolour puppy is born black and White, some with brown markings near the eyes and ears, the blue-fawn-white blue and white. 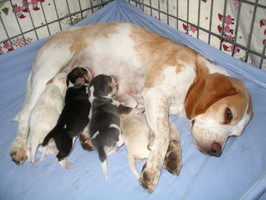 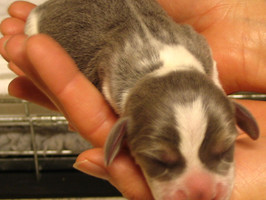 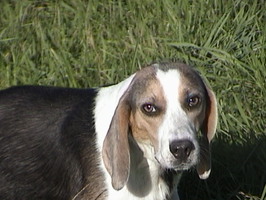 The so called "blue mottled" is caused by a totally different gentic background. The blue effect is caused by spots of black hairs within the white coat. All the blue-fawn-whites in Germany go back to Graadtre's Hot Pursuit of Rossut.

The tan clour of the dog will develop on the head, hind and foreleg as the dog gets older.

Some puppies show white hairs at the age of eight weeks. These hairs are only seen in a puppy coat. 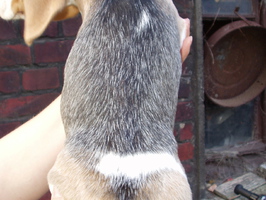 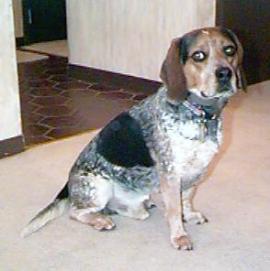 the varieties of tricolours 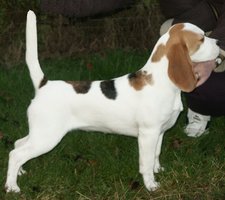 The bicolours have the two colours brown and white, calles lemon, tan and red, regarding the density of the pigment of the coat. Some beagles have a rich tan clour and are called orange.

The puppies are born white with creme markings, which darkens as the puppy gets older. On a puppiue it is sometimes hard to tell which colour the dog will develop when it gets older, so in the German Beagle Club they are registered as "bicolour". Most of the bicolours end up as tan, some are red, only a few are lemon. The lemons look white when they are born, their nosepigment is the darkest of all three.

not the different nose pigment 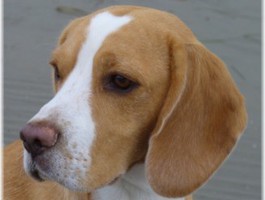 Usually the darker the coat pigment the lighter the colour of the nose.  We like the dark nose pigment but regarding the genes the red-whites cannot have a real dark nose. 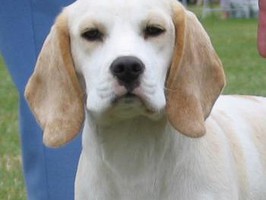 The colur of the nose even varies with the hormon cycle of the bitch. 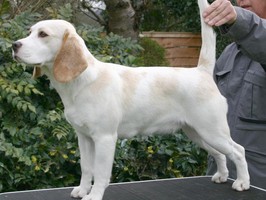 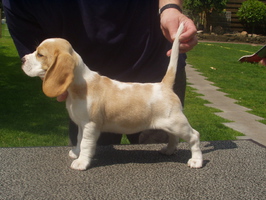 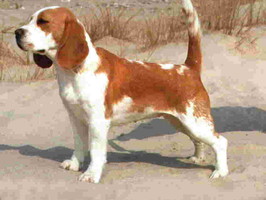 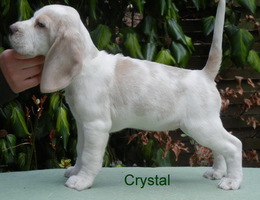 fawn-white - the colour of a bicolour with the effect of the dilutuion gene (d), the dilution gene will lighter eyes as well

The pieds are called, lemon-pied, hare-pied and badger-pied, most of them are hare-pied. On a pied the one hair itself has different colours (should be the agouti-gene). The tip of the hair is black. The range of the pied on the body can be from a stripe on the back to the full side of the body. You can alays tell a pied by the typical nose, the rims darker and the centre part paler (some call ist a "butterfly-nose"). The pied puppies look when they are born like the bicolour pups with dark eye rims. 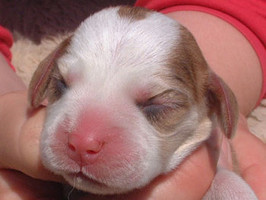 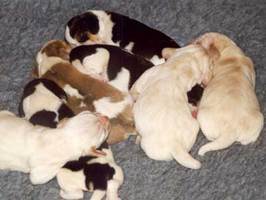 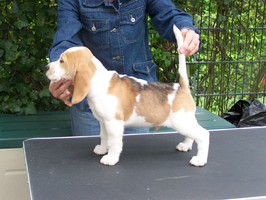 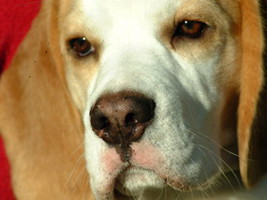 When the dog gets older the pied stripe on the back can fade out so that one can only identify the pied by the butterfly-nose. 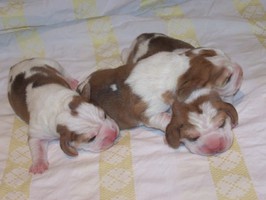 There are still judges that don't know about the harepied colours and disregard the dog  with "wrong nose pigmentation" The hrapied beagles in Germany go back to the "Korwin" beagles of Christine Watson in Scotland. They were brought to  Germany by Bärbel Röllinghoff of "Bar Atlantic".

The mottle colour used to be the colour of the pack hounds, these dog lacked the quality of a show beagle. some british beagle breeders wanted to save the colour and brought it into the show beagle scene. Well known for his mottles was Davis Nicolsen with his "Sabinhay"beagles. In Germany the frist were bred by Ulla Christian, kennel "vom Kemnader See".

A mottled beagle has little spots of dark hair on the white areas of his coat. The white of a mottled is never a pure white but a pale cream. The mottled is called afte the origin coat colour, e.g. lemon-, tan- or red-mottled and blue-tan-white-mottled. There could be a misunderstsanding, what is a blue möttled, the blue-tan-white-mottled or the blue-mottled shown earlier. You can tell a mottled puppy by the paws. Within the first week it will show the pigmentation of the paw starting on the edge of the paw, looking like rings later. 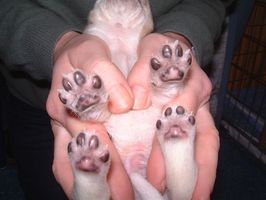 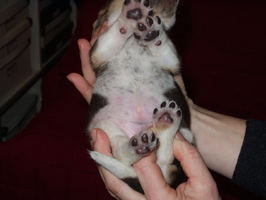 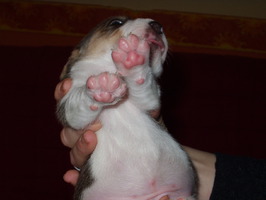 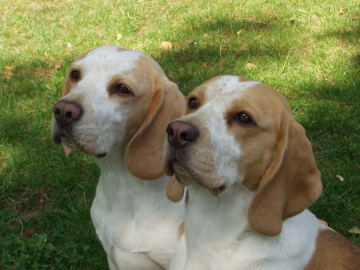 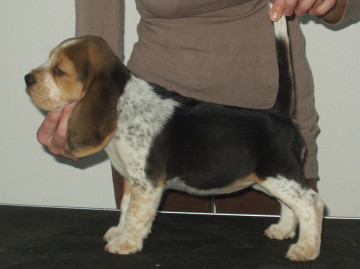 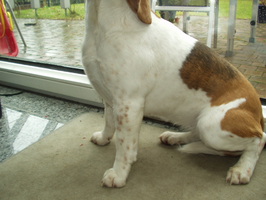 The gene for the colour liver changes the black pigment (B) into brown (b). It is a recessive gene so it will never disapear completely. The liver colour is not allowed by the official beagle standard because of the light eyes that go with the coat colour.

left triclour ,right liver, unfortunately in this case both dogs have light eyes 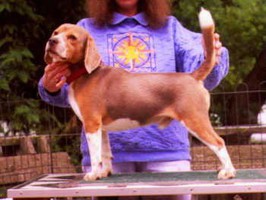 This dog is an AKC champion 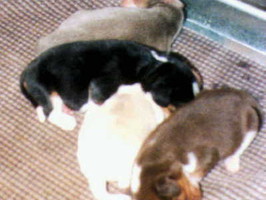 lilac, triclour, bicolour and liver - all in one litter

Black (B) is dominant, liver (b) is recessive

The brindle is not a tru hound colour for a beagle. It appeared in Sweden about 30 years ago near the Norwegian border. It is the result of a mixture with another breed, supposed to be a mixture with a Drever, s short legged Swedish breed. The brindel gene is dominant and so it's easy to select within the population. 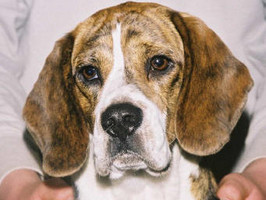 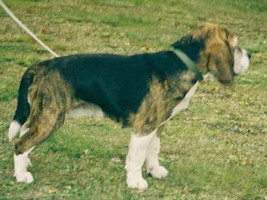 I want to thank following persons for sending phtographs or giving the permission to use one of their internet photos: